Things To Do
In Santa Cruz Bolivia 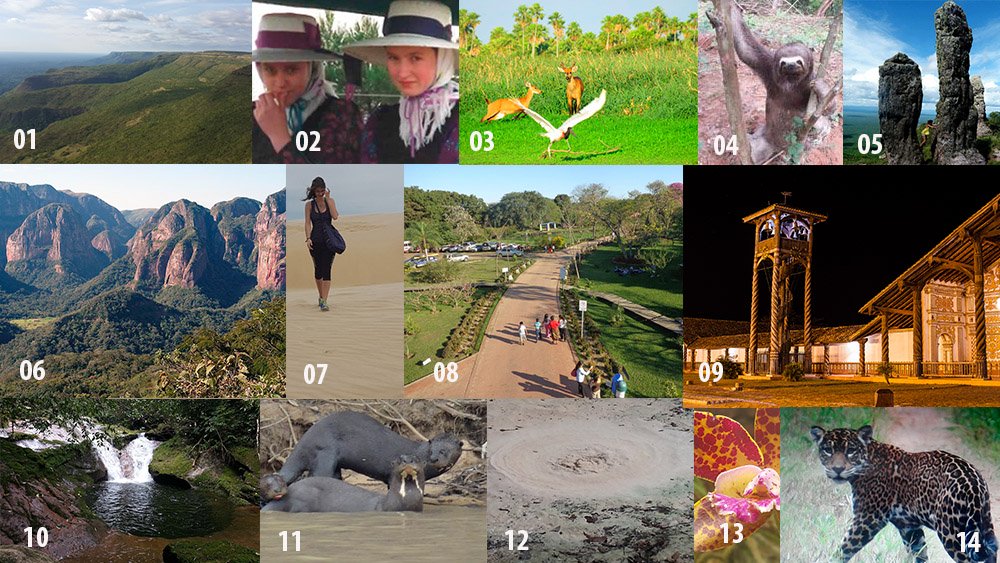 Tours By Length From The City of Santa Cruz Bolivia

There are a lot of things to do in  Santa Cruz. All you need is time, a budget. And for some destination to book in advance.

If you wanna to save some money, some destinations are possible to do it on your own. This destinations could be Sand Dunes, Botanical Garden or Samaipata. Trips to National park are much complicated.   In the case you have to plan your trips or tours in advance. Below a list of  some Things to do in Santa Cruz

These are only a few options From the Many  possible Tours in the Region of Santa Cruz. And each one of These options in the web page can be divided in 2 or more Destinations

Tourism - Things To Do / Where to go  in Santa Cruz

Although the touristic destinations of Bolivia  known outside of the country are in the Altiplano (high lands) of Bolivia. The true is that the best destinations for ecotourism are in the green part of Bolivia..These are the departments of Santa Cruz and El Beni

If you have the time and the budget  one of the things to do while you visit Santa Cruz is a trip to  the world unique national park,  Kaa Iya.  (A visit to this destination  needs  to  be scheduled it in advance.)

Among the most popular things to do in Santa Cruz is a tour to  Amboro National Park. This incredible natural Amazon reserve encloses a great diversity. It has more bird species that the whole Costa Rica. Amboro National Park has two main sides for tourism. The south side is a sub-tropical forest..at about 900 meters on sea level..It is a land field of asleep volcanos. The North of Amboro is a tropical rain forest at about 400 meters on sea level and it is Amazon basin..

Others things to do in Santa Cruz is a one day trip  to Samaipata. This nice village. Although is not very near to Amboro park it has some attractions where visitors can spend one or two days

Noel Kempf Mecado National park is again one of the main destination of South America But a very difficult destination. We operate both sides of this park. The North Side and the South Side

Like we said before Santa Cruz has many things to do or where to go. The biggest wet land of the world is also our destination. In El Pantanal we go to the bolivian and paraguayan sides including  Tres Gigantes lodge. And Otuquis National park in Bolivia

Some people have an special interest for Ernesto Guevara, so among the things to do in Santa Cruz we offer The Che Guevara Route, with beautiful landscapes. During this trip is possible to visit Vallegrande and La Higuera in 2 days 1 night

We can not finish the page without The Gran Chiquitania of Santa Cruz. A vast land with a special type of vegetation. La Chiquitania has many tourist attractions including  the Jesuit Missiones of Chiquitos, Chochis with Santiago de Chiquitos and Aguas Calientes.

Santa Cruz de la Sierra ('Holy Cross of the Mountain Range'), commonly known as Santa Cruz is the capital of the Santa Cruz department in eastern Bolivia. Situated on the Pirai River in the eastern Tropical Lowlands of Bolivia, the city of Santa Cruz and its metropolitan area are home to over 70% of the population of the department and it is one of the fastest-growing cities in the world.The city was first founded in 1561 by Spanish invader Ñuflo de Chavez about 300 km east of its current location, and was moved two times until it was finally established on the Pirai River in the late 16th century. For much of its history, Santa Cruz was mostly a small outpost town, and even after Bolivia gained its independence in 1825 there was little attention from the authorities or the population in general to settle the region. It was not until after the middle of the 20th century with profound agrarian and land reforms that the city began to grow at a very fast pace.

The city is Bolivia's most populous of Bolivia and receives over 40% of all foreign direct investment in the country. This has helped make Santa Cruz the most important business center in Bolivia and the preferred destination of migrants from all over the country.

Home > Things To do