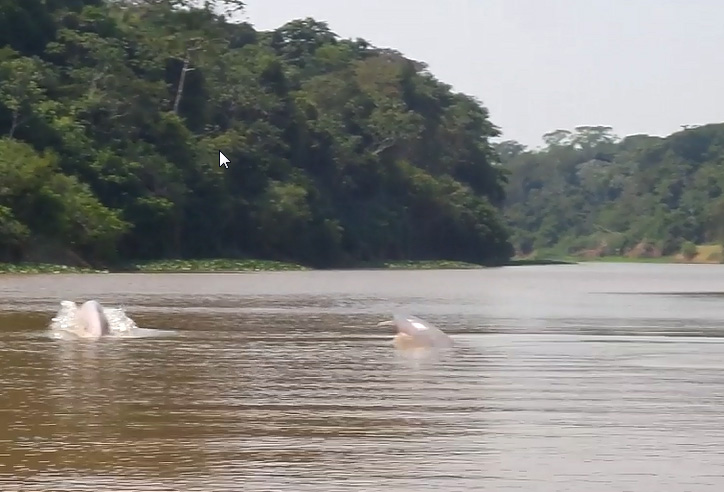 Amazon rivers, streams under or on the surface are the arteries of the planet Earth. These arteries located  especially in the  basin, are subject to radical  changes throughout the year. Amazon rivers provide a range of habitats, including swamps, marshes, streams among others.

The Nile river can be  the world’s longest, the Amazon River sets the record in terms of the sheer volume of water that it carries – a mind-boggling average discharge of 219,000 m3 /sec of water

Roles of the Amazon Rivers 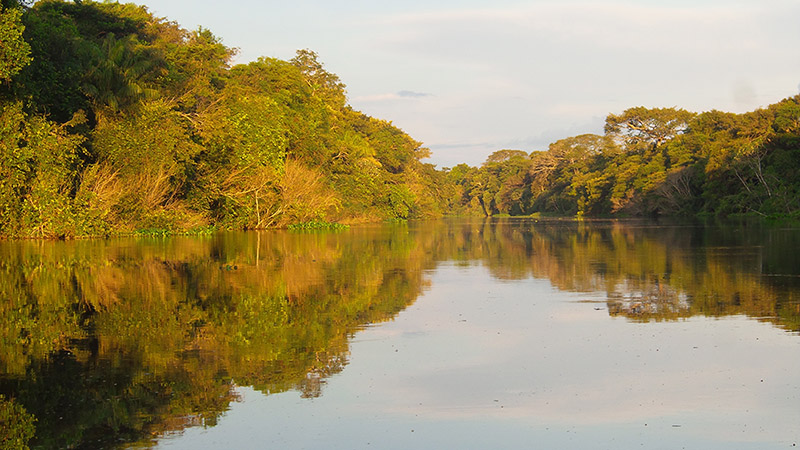 In the Bolivian amazonian almost all the ecotourism destinations are off the beaten tracks. One of these is the village of  Bella Vista located on the banks of two Amazon rivers. This area has the purest air in the world according to many specialists in climatologist and ecologic sciences. An example, the Tajibo tree is responsible for most of the oxygen generation in the world.

In Bella Vista visitors can find a very nice touristic lodge called El Tucunare. It is owned by a french guy named  Claude  he  invites us to discover  this  destination where you can be in touch with the wildlife, in the amazon rivers San Martin and Rio Blanco, and at the same time be in touch with the local culture.

To travel to El Tucanare lodge or to Bella Vista is possible to do it by a private plane " Aero taxi" or by land  from the city of Trinidad in el Beni Bolivia.

Bella Vista is part of a natural reserve called Itinez. 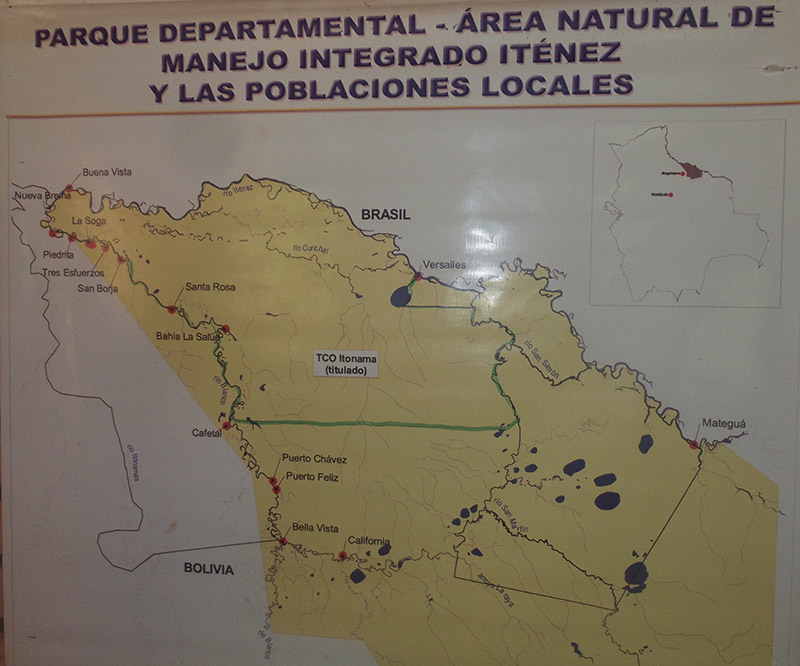 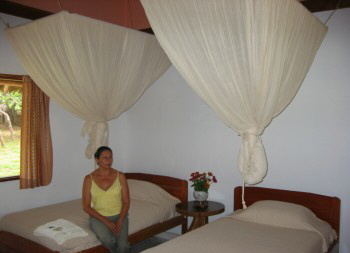 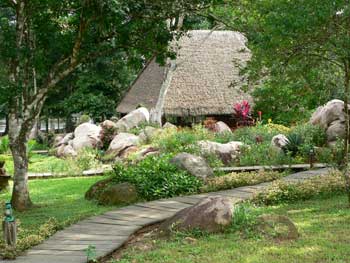 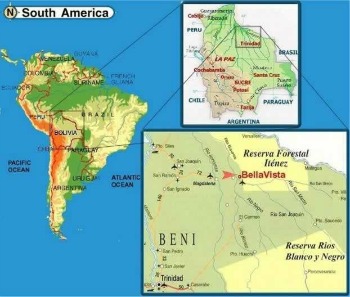 We will visit the town and be able to enjoy the pretty riversides around Bella Vista.

From June to December. We start sailing the Baure River. According to the level of the water, we will be able to enter a called stream “Trinidadcito ", where we can Lastd a lot of piranhas, crocodiles and amazon rivers otters. If the level of the water is very low, we head to the border of the river and thus we have the possibility to take good photos of various animals and fish.

By the evening, we have a trek that lasts three hours to the mount. There you will discover the wonders that the nature presents to us, listening to the sounds of the Amazon and taking photos.

The house of the freshwater dolphins (Inia geoffrensis) and a walk

In the Baure River, near the village we will take a walk to see the pink and blue river dolphins. Carrying on up the river we will go to the Salitral and into the forest to a small lagoon; home to many animals and giant trees.

After crossing the San Martín river on horseback we shall go for an hour and a half through the pampas to an island where there is a troupe of monkeys, flocks of parrots, wild turkeys, small deer, etc.

After an hour by boat, at nightfall, we come to the rocks of Verdún to listen to the sounds of the large fish in search of food, the crocodiles and the river dolphins. In the jungle by the side of the river you can hear birds singing, and at night, the growling of a jaguar. Guaranteed to get your heartbeat going!

A night of typical music

A local group will come to entertain you with traditional music, dancing and song and the dancers from the village will show off their beautiful typical dress. 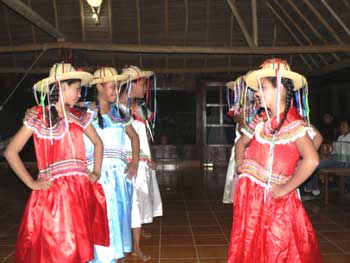 Like in many communities of the bolivian amazon rivers, here you can relax on the beach next to the River Baures and watch the local people swimming, fishing, playing and bartering their produce.

20 minutes upriver we enter the forest to reach a lagoon 100 meters from the riverside. We will be able to see crocodiles, capybaras and different varieties of birds. The fishing is good but difficult here but we can catch tucunares, piranhas, bentones and surubies. In the lagoon outlet we can fish for curubinas, piranhas and palometas. And then have a good lunch!

Some activities are better at certain times of the year as much depends on the height of the river. From December to April the water can rise up to 7 metres and begin to recede in May.

The Amazon flora of the Forest of Bella vista

The forests contain trees of all types, such as: Itahuba, Caricari, Tajibos, Cedar, rust-coloured Cuta, Almandrillo and others. 50% of the woods are exotic.

On some lagoons we can appreciate a variety of the Queen Victoria lilies, which can measure up to 2 meters in diameter – the largest in the world, Wild flowers of incredible beauty and colours can be found throughout the zone, from the rivers to the forest.

The fauna makes up 80% of the diversity in the world according to some scientists. 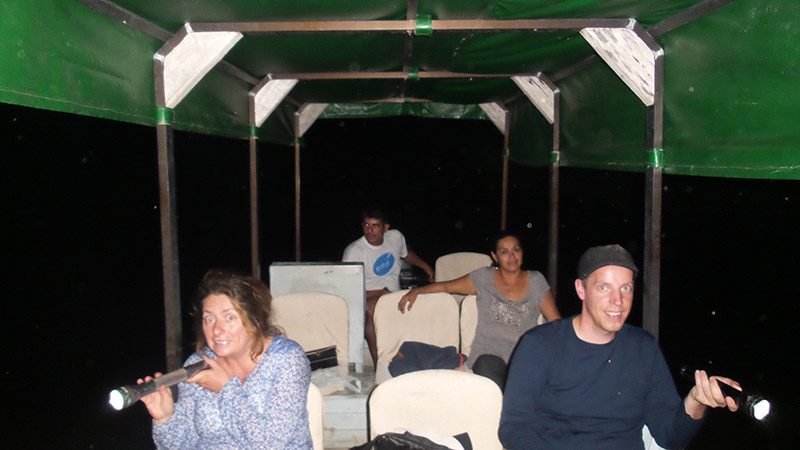 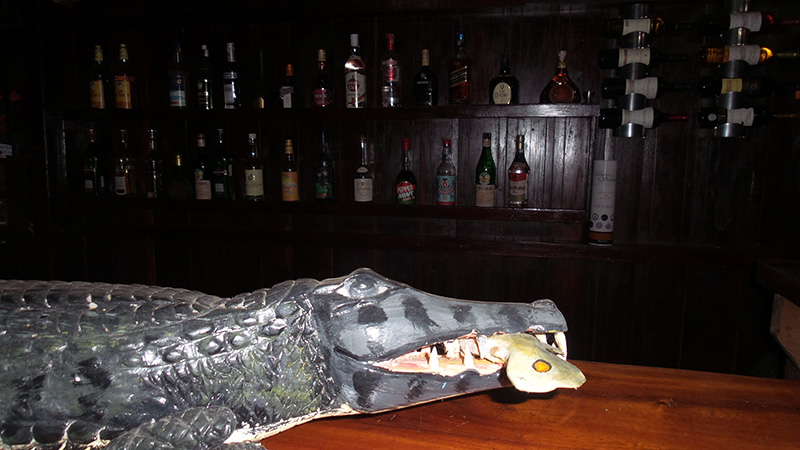 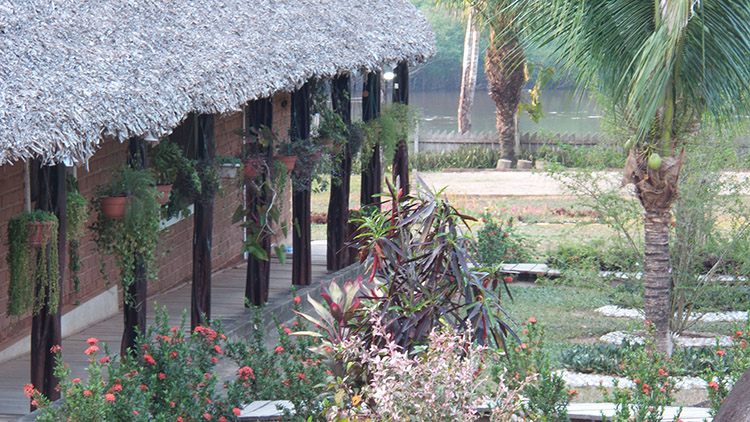